The film The Reign of Fanes 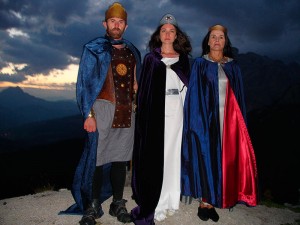 The film The Reign of Fanes spreads out of a deep rooted passion for the mountains and for the ladin legends of the Dolomites mountains – ladin ist the most ancient alpine language yet spoken today.

As a child Susy Rottonara was fascinated from the mountains and from its mythic tales and she dreamed of playing the role of princess Dolasila (Dolasilla), the protagonist of the legend of the Reign of Fanes. In 2005 her dream is fulfilled as she succeeds in making the film The Reign of Fanes together with Roland Verra (co- author and director) and Hans Peter Karbon (producer and cameraman).

In the film she is co-author, composer of the film music, singer –soprano soloist– and leading actress.

The film was co-produced and broadcasted by Television RAI TV Ladina and RAI Sender Bozen of Bolzano and was awarded with many international prizes.

The story in the film is based on one of the most fascinating and complex legendary tales in Ladin dolomitic tradition, that is the legend about the mythic Reign of Fanes, a cultural heritage that can be compared to the most famous mythic tales in classic tradition and Arthurian epic, as many researchers have proved
Read more..

The plot shown in the film represents the central theme of the longing for increasing power of the king of Fanes, who spoils human relations, causes the fall of his realm and even the death of his daughter, the warrior-princess Dolasila.

The figures are in part realistic -the king and the queen of Fanes, Dolasila and Lujanta, Ey de Net, the prince of the Cajutés and many extras- and in part supernatural -the sorcerer Spina de Mul, the witch Tsicuta, the Mjanines (a kind of nymphs), the Salvans (wild people),the gnomes and the flaming eagle.
Read more..